Num and I (hmm, guess it was a "Num-and-I" weekend, but really only Saturday night and Sunday morning.) went to....IHOP for brunch. In case you cared: 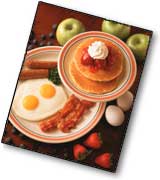 The best of all worlds! Two eggs, two bacon strips, two sausage links and French-style pancakes (folded pancakes topped with powdered sugar and orange marmalade.) A little too sweet for my tastes and marmalade tastes funny.. [Sorry, no picture available, and I scoured the Internet.]

In the news, I found a cool picture on MSNBC, part of their "The Week in Pictures":

Matter vs. Antimatter
A composite image of the Crab Nebula shows X-ray (blue) and optical (red) images superimposed. Multiple observations made over several months with NASA's Chandra X-ray Observatory and the Hubble Space Telescope captured the spectacle of matter and antimatter propelled to nearly the speed of light by the Crab pulsar, a rapidly rotating neutron star the size of Manhattan.

Num and I met up with Anju and Sunny (a double date?) for dinner at Medina--an interesting culinary experience in French Moroccan experience. Here are pictures from the evening, including a so-so picture (not one of my best) of the bellydancer.

Why, I don't know, but I've stayed up all night working on my website. I had Diet Coke at dinner, so maybe that's why. Which inevitably means that I'll have to drink even more soda tomorrow so I don't crash at my all-important meeting at work.

Well, the good news is that I've added another Easter Egg page with a new Flash animation. Check it out, if you can find it. It's all about "My Favorites." Now I just have my "What's with all the nicknames?" page left to complete.

FRIDAY NIGHT UPDATE: No, I'm not in any crazy sexy cool club, or out with the guys, or helping the orphans tonight. Since I'm so tired, I stayed home, watched multiple episodes of Star Trek: The Next Generation on TNN, ordered Chinese food, and have been playing Warcraft 3.

Funny story. So, my concern was that I'd fall asleep during my meeting today. I drank a lot of soda at lunch, so that worked fine. However, on the bus ride home, I fell asleep, and woke up somewhere near Bayonne--I totally missed my stop by 20 minutes. I woke up to find a different lady sitting next to me, and very unfamiliar landmarks passing outside the bus window.

Needless to say, I got off the bus. I ended up walking a bit, and then hailing a cab to get home. Turns out I was still in Jersey City, but in the way southern part of it.

Well, if you're me, you just sit there rubbing your forehead as you realize you are NOT going to make it on time. What do you think this is--the movie Speed?

I'm working on a new "Joel's Favorites" page. Hope it surprises, and yes, even disgusts you.

Here are top ten comments made by sports commentators that I'm sure they would like to take back:

Weightlifting commentator at the Olympic Snatch and Jerk Event:
"This is Gregoriava from Bulgaria. I saw her snatch this morning during her warm up and it was amazing."

Ted Walsh - Horse Racing Commentator:
"This is really a lovely horse and I speak from personal experience since I once mounted her mother."

Grand Prix Race Announcer:
"The lead car is absolutely, truly unique, except for the one behind it which is exactly identical to the one in front of the similar one in back."

Greg Norman, Pro Golfer:
"I owe a lot to my parents, especially my mother and father."

Ringside Boxing Analyst:
"Sure there have been injuries and even some deaths in boxing - but none of them really that serious."

Baseball Announcer:
"If history repeats itself, I should think we can expect the same thing again."

Basketball analyst:
"He dribbles a lot and the opposition doesn't like it. In fact you can see it all over their faces."

At a trophy ceremony BBC TV Boat Race 1988:
"Ah, isn't that nice, the wife of the Cambridge president is hugging the cox of the Oxford crew."

Metro Radio, College Football:
"Julian Dicks is everywhere. It's like they've got eleven Dicks on the field."

US Open TV Commentator:
"One of the reasons Arnie Palmer is playing so well is that, before each final round, his wife takes out his balls and kisses them. Oh my God, what have I just said?" 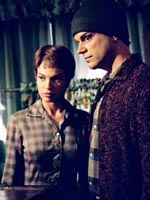 Big revelations here: I think I might like Enterprise (the newest Star Trek series.) Tonight's episode was "Carbon Creek" where you find out that Vulcans have been on Earth since they crash-landed in the 1950's. Apart from not quite understanding how they understood how to speak English and how to put on clothes, etc, the episode was still interesting.

I'm also giving the new "Twilight Zone" show with Forest Whittaker a chance (UPN @ 9pm EST). I used to love the old episodes (who didn't?) so I'll give this one a shot. The first half "Shades of Guilt" starred that guy from the short-lived Sci-Fi show "The Invisible Man", and the second ep starred Shannon Elizabeth (yes, Shannon Elizabeth). She played this imaginary dream lover, so I guess it wasn't too far-fetched for her acting skills.

My friend Tabitha sent me a funny link. If you're a fan of Triumph the Dog, check it out. It's a

It's a long video, so I hope you have a fast connection.

I did the dishes! It took me 1/2 an hour!. Some other big news -- I'm on Chapter 10 of the Human Campaign in Warcraft III. Looks to be the last mission/chapter of the Human campaign, so I think I go on to the Orcs after this. Well, after I beat this one, which is looking very tough right now.

I'm sure you people care.

Ok, it's Thursday evening, and I have discovered some lazy qualities within myself. It's Thursday, and I still haven't washed my dishes/utensils that I was supposed to do on Sunday (yes, Sunday), and I haven't put away the clothes I washed on Sunday. Instead, I've ingeniously covered them with my bedsheet so that the cat won't roll around on them. So, yes, I have had a big pile of clothes in bed with me since Sunday night, but I swear I haven't cuddled with them.

Well, maybe once, but by accident. I swear.

When I'm not being intimate with a big pile of clothes, I'm playing Warcraft III: Reign of Chaos. Here's a sample screenshot. Ain't it cool? I didn't think I'd like it, but the story line is pretty good, not to mention the graphics.

I'm also playing around with my new Toshiba e740 (see sidebar.) I've already tried it out at Num's apartment and in Madison Square Park outside my office. The verdict: It works pretty ok, except for all the horizontal and vertical scrolling. Guess websites weren't made for 3.5" screens. Anyhow, I recently checked out the NYC Wireless site and found some free wireless hotspots in the city. I was pretty surprised. Well, guess that means I don't really have to pay extra for the T-Mobile Hotspot service.

Speaking of T-Mobile, in case you have been wondering, the service has been pretty ok. Glad to have the new phone, and a flip-phone in general is pretty okay too.

Wow, it's been a while since I last updated. Well, sorry, but life has just been about getting ready to move. The only really interesting things have only happened this weekend. Here's the rundown on Joel's madcap weekend:

Friday Nite: My buddy Anil came to New York for the weekend, so the Amazin' Teena organized an evening out for us--Cafe Wha down in the Village. Doug, Num, and I met up with them there. More pictures in the Friends gallery.


Saturday: We had our first ever CSI Youth Picnic / Basketball Tournament over in Grant Park in Valley Stream NY. I think it went pretty well. Sorry I don't have pictures, but if you do, please email me!

Saturday Nite: Oh boy. I got home from the tournament, cleaned up, and met up with Vib, Chirag, and a few others with plans to go to the San Gennaro Festival, but we decided it would be more productive use of our time if we tried to hit every bar between 14th and 20th Streets instead. To sum the evening events up, we eventually finished the evening at Trust Bar in the Meat Packing district of the city watching the De La Hoya / Vargas fight (De La Hoya kicked his ass in the 11th round.)

[Actually, Chirag, Vib, and I eventually finished the evening getting a slice of pizza, but you should also pay no attention to the indian man holding the chicken.]

However, I digress. I made it home at an obscene hour Saturday night / Sunday morning, so that equals an evening well-spent!

Sunday: Hung out with the 'rents at the house and did laundry. Ok, not a great ending to the weekend, but I needed a low-key day.

Anything big? Just switched to T-Mobile instead of AT&T Wireless. I've been a long time AT&T customer (since 1997), but they've just been pissing me off recently. Since I lost my phone last Friday night, I decided now wouldn't be a bad time to switch. Hey, if you have opinions about T-Mobile, shoot me an email. Here's my new Motorola v.60. It's my first flip-phone, so it'll take some getting used to.

In other news, Josh sent me some pictures from his NYC/Boston trip, so I've added about nine pictures to what I had before. Oooh, aaaah.

Oh, I'm selling my iPaq, my old computer, speakers, a 900MHz Athlon processor, and some case fans. If you're interested, I'll end the auctions early on EBay. Just hurry, cause they end this Sunday night.

Why am I selling my beloved iPaq (Num affectionately refers to it as "Pip")? Well, I really want the Toshiba e740 Pocket PC with built-in 802.11b wireless and room for CompactFlash AND SD card. Yes, I know, after only getting my iPaq in February. What a freak I am.

Spent part of the weekend at my parents' house. Watched Monty Python & the Holy Grail with my sister. Other than spending quality time with my family, this weekend has been pretty lazy since Friday night.. Might as well take this opportunity to recap recent site updates. Hey, it's 4:04AM. Cut me a break on the dearth of creativity.

Labor Day weekend, and I've really accomplished nothing in the past two days, which is probably fine with me. Well, that's not completely true. Josh, Jimboy, and their friends came to NY for one night only (Friday.) After careful planning, we met up at Remote, then went dancing at our 3rd option, Punch (Ohm is apparently under renovation and Discotheque wasn't really happening inside.)

Everyone had a good time, and I'm glad for it. Night was late, so we never got to wrap up at the W in Union Square. Well, maybe next time. Check out the Friends gallery for what happens when the Houston boys come to town.